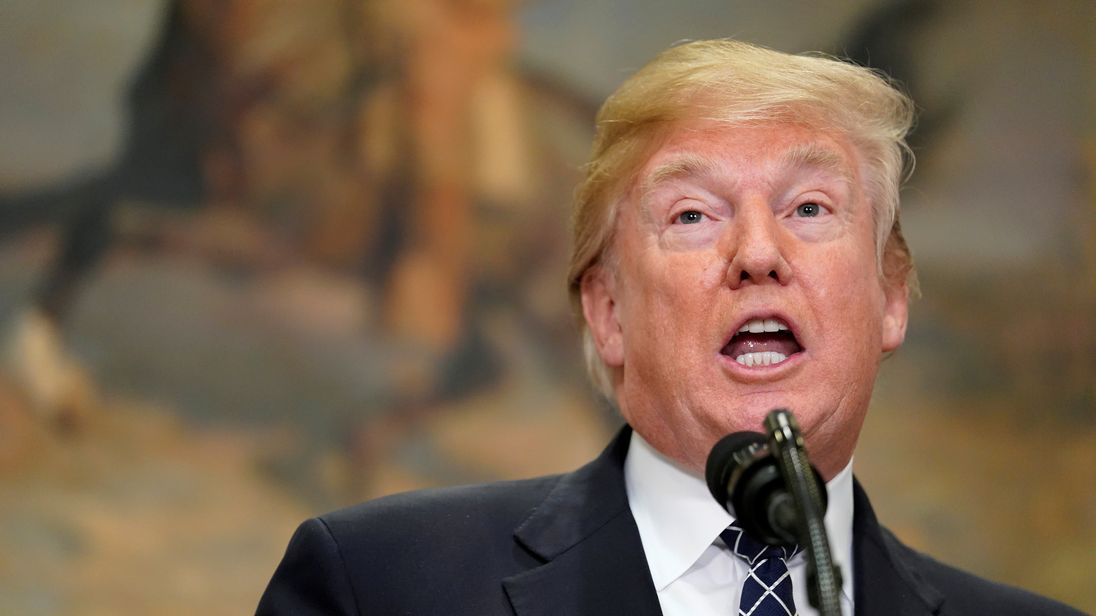 Days after Trump sparked an international uproar by reportedly complaining about immigration from “shithole” countries, his administration sought to refocus the debate by tying a series of current immigration programs to terror threats.

A new report from the Justice and Homeland Security Departments said that nearly three-fourths of the 549 international terror-related convictions in US courts since the September 11 attacks in 2001 involved foreign-born individuals, including 148 granted citizenship after arriving in the United States.

It also said it had blocked many hundreds more potential terrorists who tried to enter the country both legally and illegally.

Trump tweeted out a link to the report Tuesday evening, in support of White House efforts to end programs like the green card lottery and family-based migration.

“We have submitted to Congress a list of resources and reforms. We need to keep America safe, including moving away from a random chain migration and lottery system, to one that is merit-based,” he said.

Attorney General Jeff Sessions unveiled the report five days after Trump rejected a bipartisan deal that aimed to reform some immigration programs, partly fund a Mexican border wall, and guarantee the status of the “Dreamers” — immigrants brought to the United States illegally as children.

Sessions described the data as “only the tip of the iceberg.”

“We currently have terrorism-related investigations against thousands of people in the United States, including hundreds of people who came here as refugees.”

“This report reveals an indisputable sobering reality — our immigration system has undermined our national security and public safety,” he said.

Trump lashed out last week at the US judicial system as “broken and unfair” after a judge blocked his decision to scrap the program that has protected the so-called Dreamers from deportation since 2012, known as Deferred Action for Childhood Arrivals (DACA).

His Justice Department courted further controversy Tuesday when it announced it would appeal directly to the Supreme Court the San Francisco judge’s challenge to Trump’s order to end DACA.

The department said it was avoiding appealing to the northern California appeals court to expedite the case. But critics said the move aimed to get the case before a likely more sympathetic group of judges.

“Today’s announcement is just the latest in a disturbing pattern of hostile actions directed at young immigrants across America,” said Lorella Praeli, director of immigration policy at the American Civil Liberties Union.

It was during increasingly fraught negotiations on a bipartisan immigration deal that Trump, according to one official present, complained about immigrants from “shithole” countries and suggested he preferred Norwegians.

“I don’t think the president was well served by staff…. We cannot do this with people in charge at the White House who have an irrational view of how to fix immigration,” Graham said.

“This has turned into an ‘s-show’ and we need to get back to being a great country where Democrats and Republicans work together to do something that we should have done years ago,” he added, referring to immigration reform.

But Graham said he would continue to press for a deal that protects DACA recipients, partly funds the border wall, and moves policy toward more merit-based immigration.

In a briefing for journalists, a senior administration official said Tuesday that they want an immigration system that brings to the country people who will contribute knowledge and skills and better “assimilate” into US society.

“A properly functioning immigration system promotes assimilation in all its forms,” the official said.

White House officials say they want a system more like Canada’s or Australia’s, where hopeful immigrants are evaluated on what kinds of skills or knowledge they can bring to the country.

But critics said the government’s approach, and the new immigration report, appeared to be aimed primarily at keeping out Muslims.

“This agenda-driven report is clearly designed to support the Trump administration’s anti-immigrant and Islamophobic policies,” the Council on American-Islamic Relations said.

“It ignores violence committed by white supremacists and other non-immigrants, and instead seeks to tar all immigrants with the brush of terrorism.”