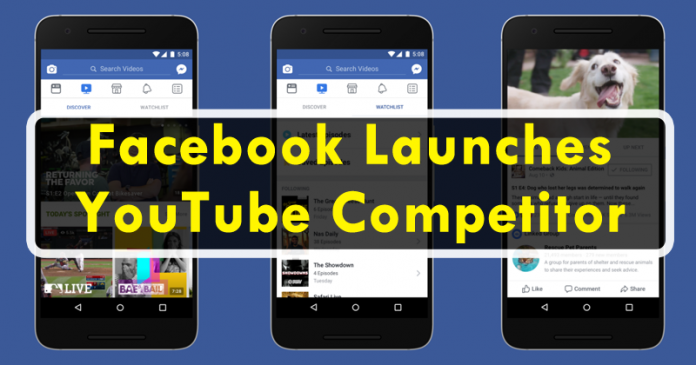 We all know very well that the tech giant Google’s YouTube is arguably the largest and most popular on the internet as a video platform. However, now the social network giant Facebook has also launched its own video service platform, a real YouTube competitor.

The tech giant Google’s popular and well-known video platform, of course, YouTube is arguably the largest and most popular on the internet as a video platform. Without competing to the height, the social network giant Facebook decided to attack this segment and has already announced the “Watch” that according to the information, will be a platform for “shows.”

It is called Watch and will be the new platform of videos that will integrate with the social network giant Facebook and that will be a true rival of YouTube.

Daniel Danker, Facebook Product Director, recently, announced the news here https://newsroom.fb.com/news/2017/08/introducing-watch-a-new-platform-for-shows-on-facebook/ and reveals that this platform will be available for all types of devices (mobile, Desktop and even in TV apps).

Users will have the possibility to directly access the platform and also have several filters available so that they can follow and watch the content that interests them.

Like the concept of the social network giant Facebook, this platform will also have its social aspect, since the content will also be organized according to what our friends and community is watching.

Here is what the social network giant Facebook stated “Watch is personalized to help you discover new shows, organized around what your friends and communities are watching. For example, you’ll find sections like “Most Talked About,” which highlights shows that spark conversation, “What’s Making People Laugh,” which includes shows where many people have used the “Haha” “Which helps you connect with friends about shows”.

This platform will initially only be available in the United States, as of this Thursday. However, very soon it will reach users around the world.

Also according to the announcement, the videos will essentially be produced by the partners and advertisers of the social network giant Facebook, but it is also possible for any user to make their videos available. However, the rules/limitations are not yet known.

So, what do you think about this new feature of the social network giant Facebook? Simply share your views and thoughts in the comment section below.