This New Tech Can Charge Your Smartphone In Seconds 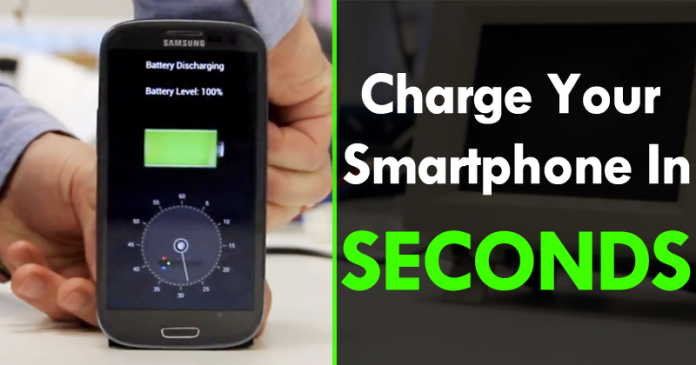 We all know that mobile phone has become an extension of ourselves, the battery has become a major concern for users. For this reason, the brands strive to manufacture lighter and more powerful batteries. But, recently, researchers found an extraordinary tech that can charge your smartphone in seconds.

This New Tech Can Charge Your Smartphone In Seconds

Since the mobile phone has become an extension of ourselves, the battery has become a major concern for users. For this reason, the brands strive to manufacture lighter and more powerful batteries, as well as equip them with fast charging technology to reduce the charging time.

To speed up the loading process, some researchers have focused on the development of supercapacitors, a type of electrochemical device characterized by its high energy density.

It stands out for having interesting qualities, such as high efficiency, long operating cycles or wide ranges of temperature and voltage, among others. They are mainly used to power microelectronic systems, computer memories, precision cameras, clocks or hybrid cars.

Thanks to these features, supercapacitors are postulated as an alternative to replace conventional batteries, as they promise to charge smartphones and other electronic devices in seconds or minutes, rather than hours.

However, current technologies are often not flexible and in most cases, their performance degrades at high speed, which is why their use has not been extended to mobile phones.

Now, a team of scientists at Queen Mary University of London (UK) has found a formula to optimize supercapacitors. To do this, they have developed a prototype polymer electrode that interlocks the nanostructures similarly to the red and white bands of a candy cane. The result reaches an energy storage close to the theoretical limit while demonstrating flexibility and resistance to the charge/discharge cycle.

“This interpenetrating structure allows the material to bend more easily, in addition to swelling and shrinking without cracking, which leads to greater longevity,” explains Stoyan Smoukov, project leader.

Researchers are currently designing and evaluating a range of materials that can adapt to this new structure of interpenetrating polymers and will continue to work so that in the near future the supercapacitors can be used to charge the mobile in seconds.

So, what do you think about this new research and supercapacitors? Simply share your views and thoughts in the comment section below.